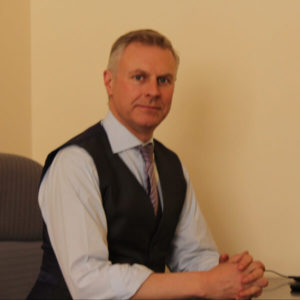 Mr. Thomas Daly is Founder & Director of TAKADA Asset Management.  Born in England and having commenced academic studies there in law, he went on to complete those studies at Griffith College in Dublin, Ireland and graduated with an LL.B (Hons). He later earned an LL.M from Trinity College, (University of Dublin). He subsequently sojourned in the United States during which time he attended the prestigious Fordham University School of Law in New York graduating magna cum laude with an LL.M in International Business and Trade Law. He was admitted as an attorney by the Appellate Division of the Supreme Court of New York and continues as an attorney in good standing in that jurisdiction.

Whilst residing in the United States, he worked as a Foreign Associate at a bilingual immigration law firm in New York City, putting to good use his legal and Spanish-speaking skills. Mr. Daly’s keen interest in natural justice led him to work in Ireland as a volunteer with the Irish chapter of the Innocence Project.

Mr. Daly has a background working in public administration having worked at a managerial level for governmental and public bodies in Ireland and more recently as a key player in the contracts and compliance division of a public body entrusted with rolling out a critical piece of national infrastructure.

Mr. Daly has always had an interest in international finance and branched out in recent years to gain experience working with a portfolio of international clients for an offshore financial services provider specialising in savings products. He achieved an increase in the number of clients for the company, exponentially augmenting its deposit base.

Apart from living in England in his early years, Mr. Daly has lived in Spain, Ireland, the U.S. and, more recently, in Malta. He has recently taken up residence again in Ireland where he is a partner in a law practice focused on corporate law.​

Houses of the Oireachtas, Dublin, Ireland (National Parliament of Ireland)

Houses of the Oireachtas Dublin, Ireland (National Parliament of Ireland)

TAKADA Asset Management is an asset management firm comprising a multi-disciplinary, multinational and multilingual team of experts providing services across a spectrum of industry areas and sectors with a predominant focus on funds and investment banking.

Drop us your number and we’ll shortly call back.